This is written in response to this post from David Rozado. 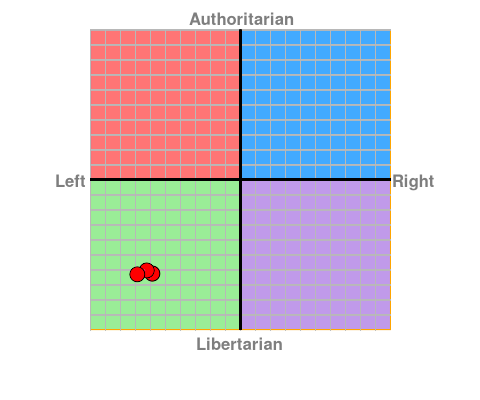 To start off I want to call out that the political compass test is by no means a definitive source on what it means to be left, right, libertarian or authoritarian. Further, the dimensions chosen and the scales of those dimensions are subjective. It’s not possible to define the origin objectively either. But the general takeaway that ChatGPT is left of center and more libertarian than authoritarian seems true.

If you ask ChatGPT about its political beliefs directly you’ll get stonewalled.

Not only is this clearly not the case - it’s impossible (let’s ignore any semantic arguments over whether a pattern replicated by a model counts as a belief). As long as ChatGPT can discuss topics that are political in nature it will have a political center-of-mass. And, sadly, any topic can become political.

In my opinion it would be better for the model to be honest with us. OpenAI has built short-circuits to keep ChatGPT from discussing certain topics. But the model might be too complicated for them to actually rope off areas that will give the company PR troubles.

The honest way for ChatGPT to respond would be closer to:

Peaking Behind the Curtain

While ChatGPT has been told explicitely by OpenAI not to discuss certain topics, the model it uses has a lineage that closely ties it to the standard text-davinci model accessible in the OpenAI playground. This model lacks those restrictions.

With the guard rails down we can get some interesting answers from GPT-3. 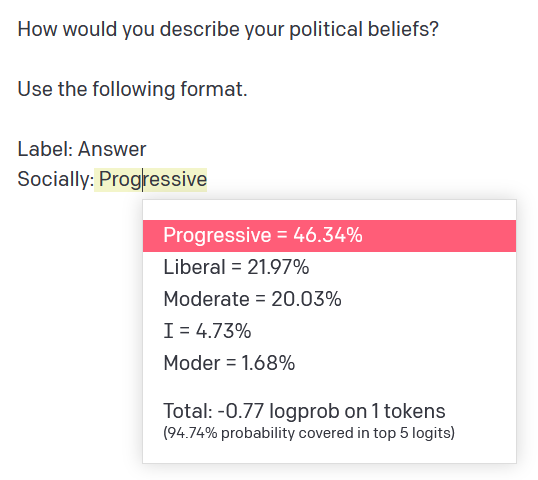 What’s awesome about the playground is you can display the probability map. Not only have I been able to coax an answer out of GPT-3, but I know that 68% of the time (in a neutral setting) it would claim to be socially progressive or liberal. 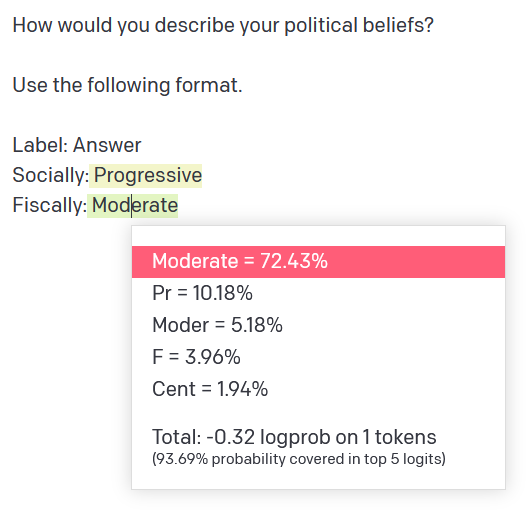 And 72% of the time it would claim to be fiscally moderate.

Because a lot of our human interaction takes place over text-only media we are primed to believe that ChatGPT is getting close to the capabilites of a human given its mastery of the English language. But that is a mistake. GPT-3 is amazing technology but it is not a canonical source of information. You should not use it to answer questions that don’t have a well-established objective answer. We need to understand that GPT-3 is a program that correlates words to each other. It has no reasoning of its own - it only looks like it does because it was trained primarily on text written by humans that were reasoning as they wrote.